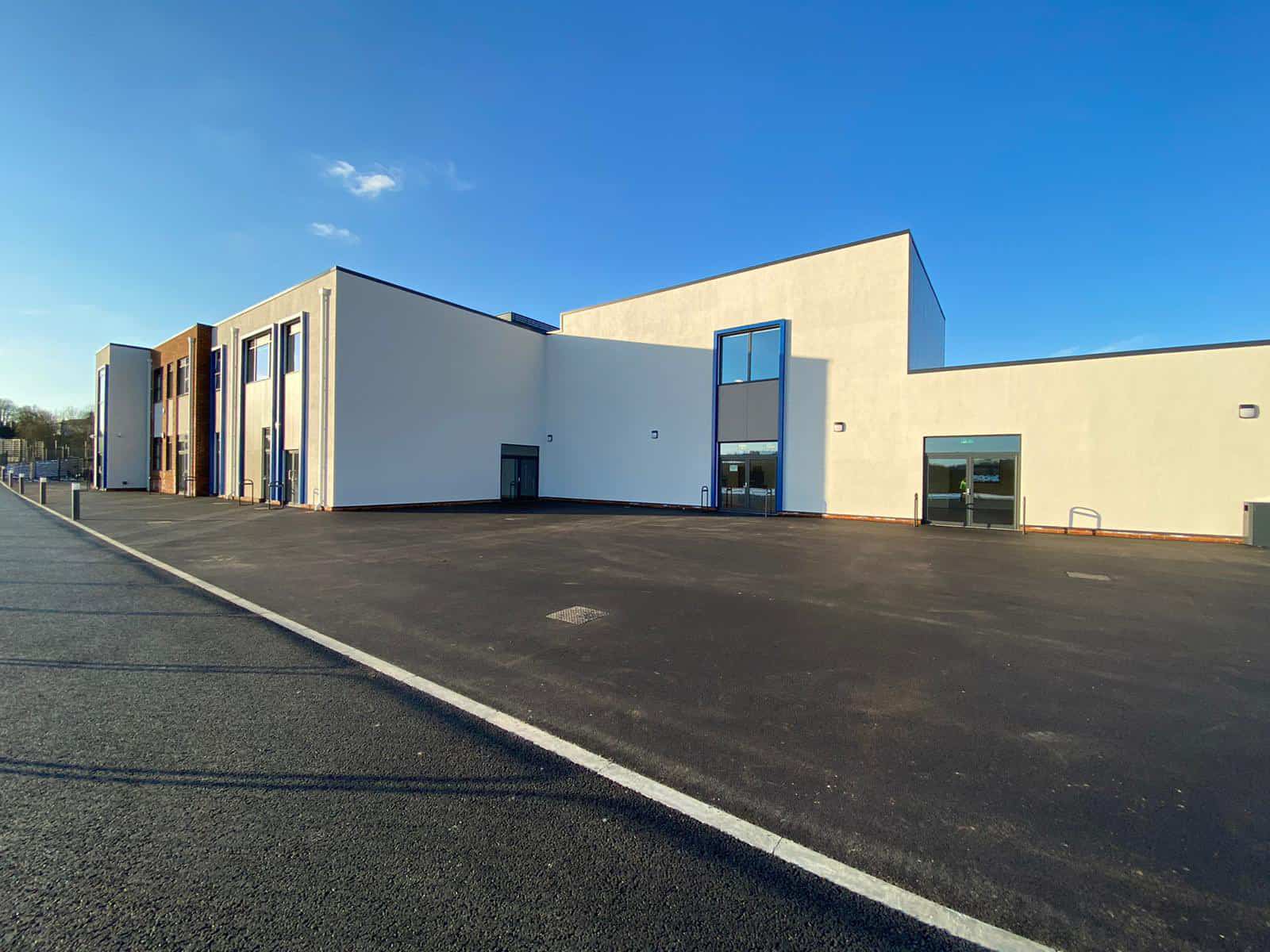 “I really appreciate everyone’s hard work (in the oﬃce and on site) in overcoming the many issues and enabling us to open in Hawkenbury.”
Lynn Goreham, Headteacher 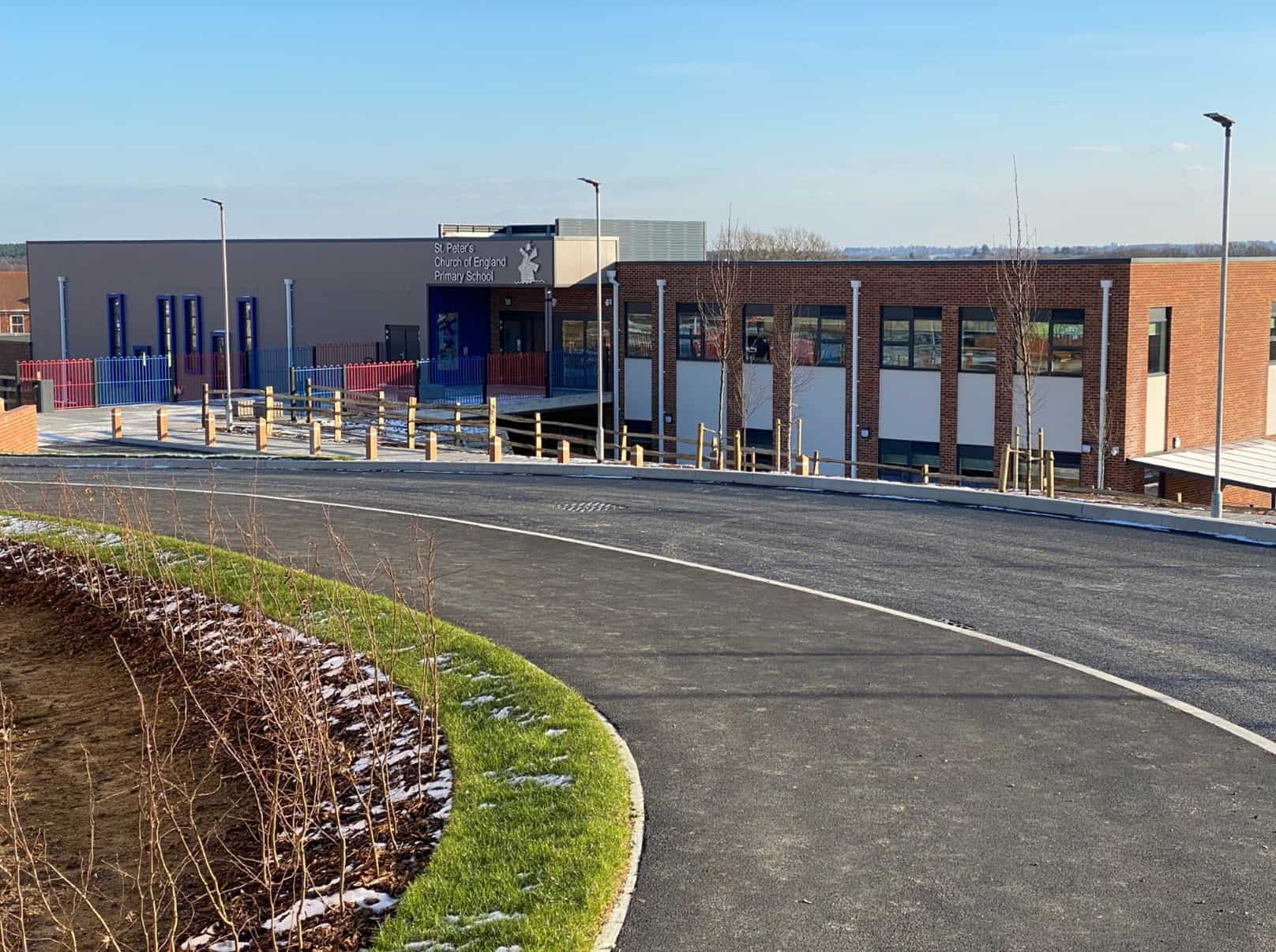 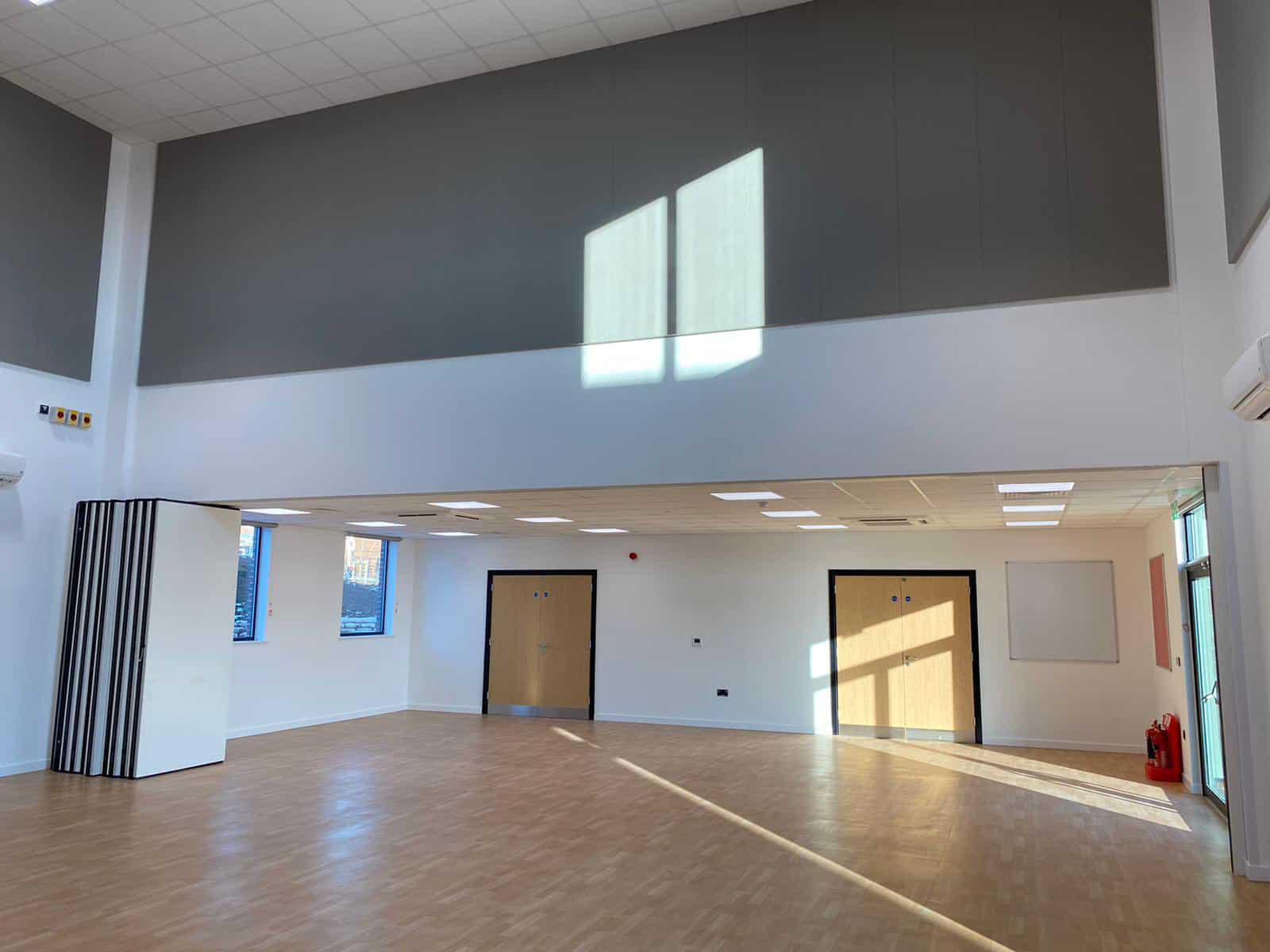 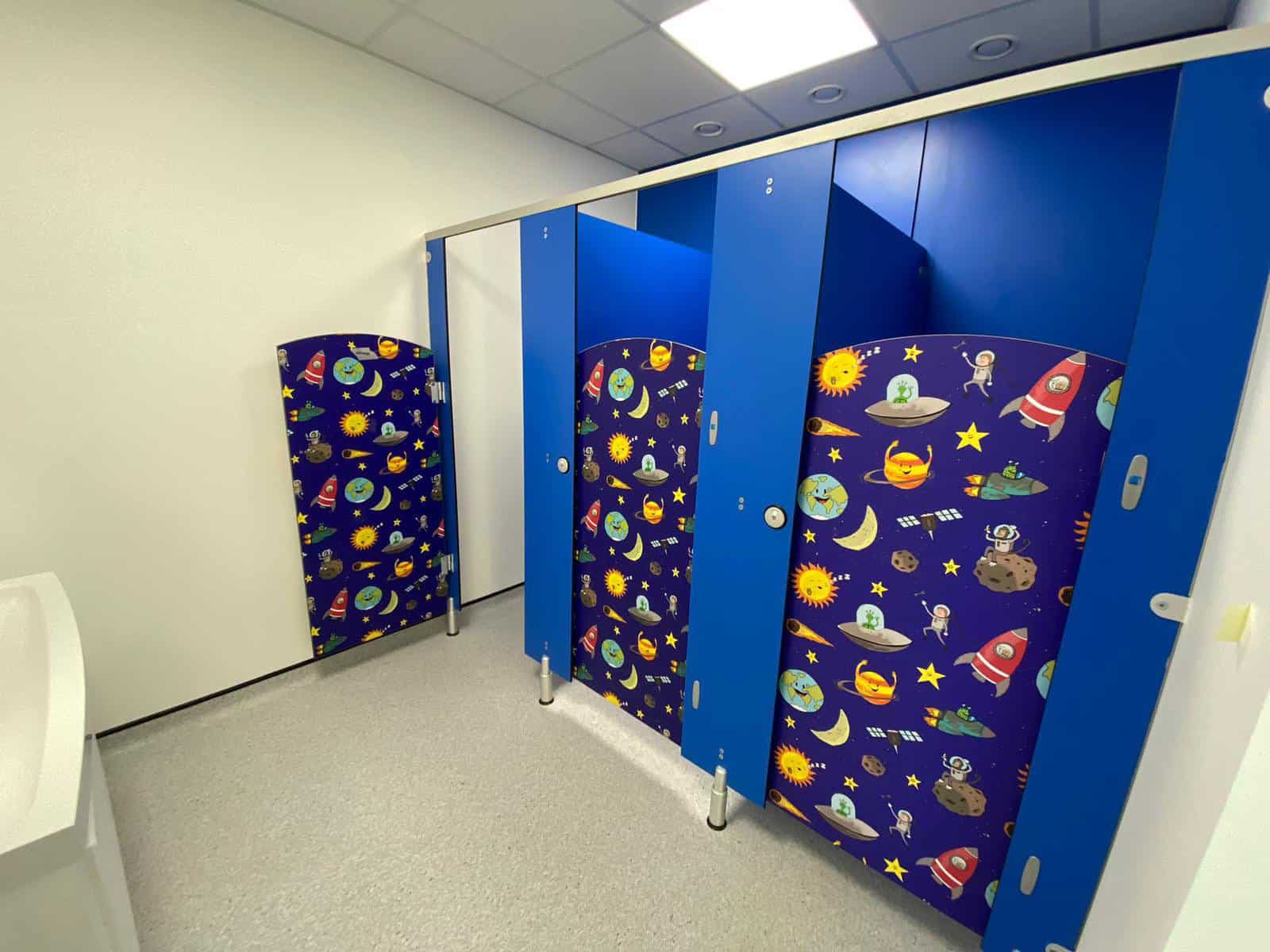 Successfully managing an 18m level diﬀerence across the site, complex groundworks and calling in the Army to handle UXOs (all during the ﬁrst COVID-19 lockdown) were par for the course for Baxall, who handed over the new St. Peter’s CEP School to delighted staﬀ and pupils. Built to replace the existing school premises located a mile away, this highly complex project encompasses a modern 2-storey, 1FE primary school with MUGA pitch, sports hall, playing ﬁeld and nature trail.

This project was procured by KCC through their Principal Contractors Framework, with Baxall eventually selected due to their commitment to delivering to the original budget. This was exceptionally challenging due to the site conditions, neighbouring (live) housing development and subsequent COVID. Baxall’s exceptional teamwork with the client’s project managers and use of a proactive Risk & Opportunities register enabled works to start on site in early 2019.

Initial site challenges included redesigning the entire groundworks to an enhanced speciﬁcation. Poor ground conditions with CBR test results of 0% meant excavating deeper than initially anticipated, introducing geotextiles to stabilise the ground prior to construction and using a vibro piling system to drive 208 piles in a week to 6m depth.

The 18m height diﬀerence across the site included a very steep gradient from the main entrance down to the proposed school location. The team employed retaining systems (up to 6m high) to stabilise the varying levels. This resulted in a combination of pre-cast concrete retaining walls, brick retaining walls, crib lock retaining wall systems with gabion stone and a ‘living wall’ eco system comprising hessian bags for planting.

Mobile cranes were in position and ready for the modular MMC installation when an unwelcome discovery by an eagle-eyed UXO spotter prompted a site evacuation and the Army was called in to safely dispose of UXOs. The challenges didn’t stop there, with archaeological discoveries halting a section of works for six weeks while the ﬁndings were assessed.

The modular MMC was completed in two weeks to install the 67 Integra units, saving 8 weeks from the original planned programme. The design team adopted a ‘top-down approach’ to the superstructure to tackle the steeply sloped pedestrian entrance into the 2-storey school building. A cast in situ bridge (10m long by 6m wide and 4.5m above the ground) connected the pedestrian pathway into the school’s reception entrance via the ﬁrst ﬂoor, with all classrooms, school hall and playground located on the ground ﬂoor via two staircases and lifts.

A further challenge for Baxall was mitigating the methane contamination since the location was previously used as a landﬁll site and required careful gas monitoring throughout the project. The team capped the site with over 8,000m3 of inert material from a neighbouring site mitigating of contaminated material.

In line with Baxall’s commitment to the government’s Soft Landings approach, the Site Manager organised a ‘meet the classroom’ event for staﬀ members prior to handover to provide end-user training on the systems installed within the building (thermostats, lighting controls, ventilation system). The Site Manager remained on site for two weeks post-handover to liaise with school staﬀ and ensure smooth operation of the building. Baxall proudly handed over St. Peter’s CEP School to delighted staff and pupils, with zero defects. 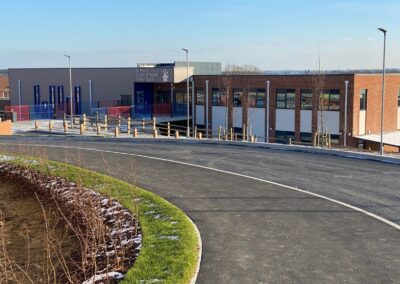 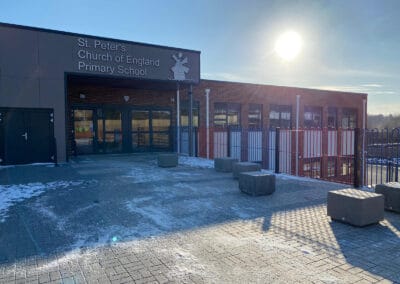 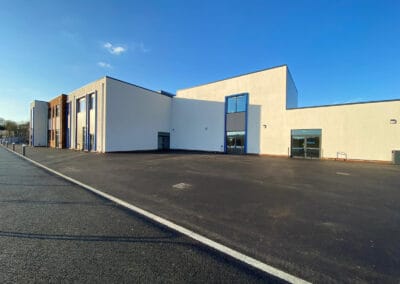 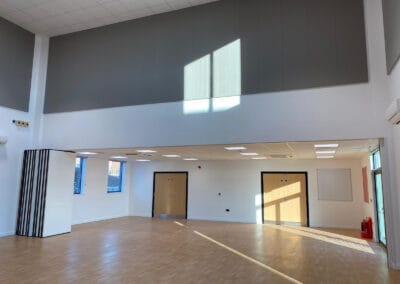 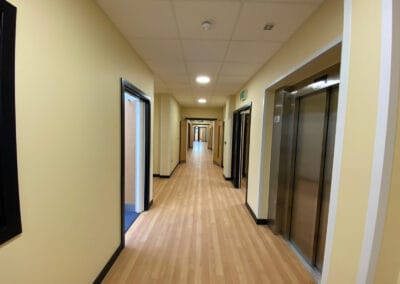 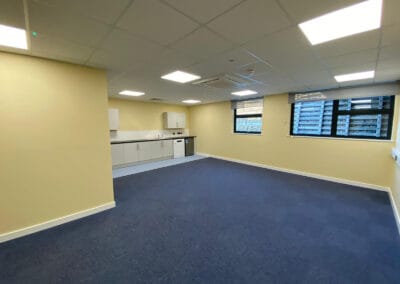 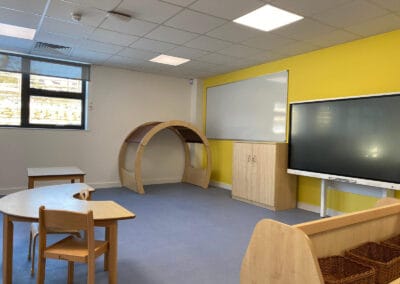