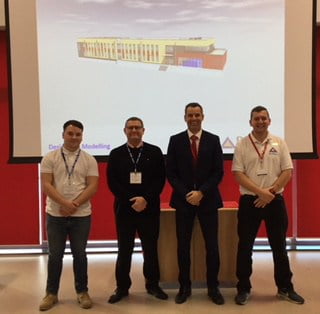 Contracts Manager Alan Leigh, Site Manager Matthew Fothergill and TrAC Site Technician apprentice Brennan Drummer recently took part in the Morning Worship assembly at St Georges C of E Primary School in Broadstairs. The team delivered an informative ‘storyboard’ presentation to the children of site progress from day one, including photographs and a visual flythrough (which was met by ‘ooohs’ and ‘wows’ from a very impressed audience!).  The presentation concluded with a Q&A session and demonstration of bird and bat boxes which had been decorated by the children; Alan explained that the boxes would be installed at various locations around the school for monitoring over the coming months and years. Having successfully delivered Phase 1, the team are currently on site delivering the £2.4m Phase 2 extension which was secured under the Kent Construction Framework. Targeted completion and handover is February 2019.